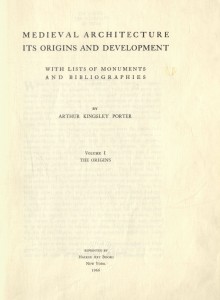 First published in 1909, Arthur Kingsley Porter’s Medieval Architecture: Its Origins and Development Volume I seeks to serve as a survey of Medieval architecture for laymen as well as architects and students of architecture. Porter notes in the beginning that that book “attempts to unravel only a single thread from the tangled skein of medieval art…[which] is made up of that succession of formative or generative styles that shaped the architectural destinies of Europe” (pg. v).  By identifying the main formative styles, Porter builds context and a better understanding of Medieval architecture, even if it is not quite a survey of the subject.

Porter begins with a discussion of the architecture of antiquity, such as Roman and German, as well as particular exploration of the elements most incorporated into Medieval architecture, including the different kinds of vaults, arches, and ornamentation. Next he examines early Christian styles, and the connection between faith and architecture in these buildings.  From there, Porter launches into a study of Byzantine, Carolingian, Lombard, and Norman architecture.  He pays close attention to the similarities and 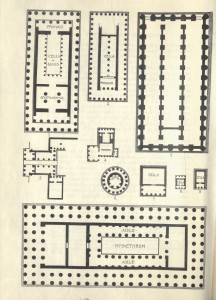 differences between each, and to the elements most frequently adopted, some of which remain popular in modern times, and others which are considered antiquated. Crucially, Porter draws a direct line between antiquity, Medieval architecture, and modern architecture, showing that ancient architectural features are not necessarily antiquated or irrelevant.

For many years, a synonym for “The Middle Ages” or “The Medieval Period” has been “The Dark Ages.”  While this has changed among historians, many in the public still refer to “The Dark Ages,” a time of seeming backwardness, where knowledge and advancement was lost as it gave way to the dominance of Christianity.  While it is true that the Church made efforts to suppress scientific thought and reading was a privilege reserved only for elites, to classify the Medieval period as a Dark Age is a gross exaggeration.  And in this sense, Porter’s book is extremely valuable, not to mention ahead of its time in acknowledging the contributions of Medieval thought and architects to the field.  In Medieval Architecture, Porter brings the remarkable architecture of Medieval times out of the Dark Ages into the light.