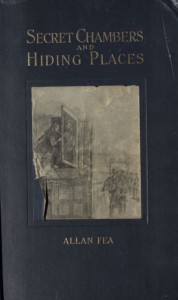 Written by Allan Fea in 1901, Secret Chambers and Hiding Places: The Historic, Romantic, & Legendary Stories and Traditions About Hiding-Holes, Secret Chambers, Etc. explores “the gloomy hiding-holes, concealed apartments, passages, and staircases…[which are] the very groundwork of romance…[and] vitality of a plot” (pg. 12-13). Fea considers both fictional portrayals of hidden chambers and passageways, as well as historical uses of such architectural elements.  He is fascinated by the mystique of secret chambers, as well as the fact that they can serve malicious (as in the case of the Gunpowder Plot of 1605, a failed assassination attempt on the King James I of England) or benevolent purposes (young James II, while captive, became known for discovering hiding places during games of hide-and-seek, and so escaped while playing the game).

Secret Chambers and Hiding Places features entire chapters focused on the above mentioned instances, the Gunpowder Plot of 1605 and James II’s escape, but also explores specific houses, their owners, and the intended use of the secret spaces in every case.  He explores the phenomenon of “priests’ holes,” which were hiding spots built into the homes of Catholics in England during the time when Catholics were persecuted, in order to hide a priest in the home, sometimes including passages for escape.  In Salisbury, an old mansion “is said to have been a favorite hiding-place for fugitive cavaliers [Royalists] at the time of the Civil War” (pg. 160).  Fea provides a detailed description of the passage itself, as well as how it was not discovered until the late 1800s by complete happenstance; someone bumped a panel, which then opened to reveal a ordinary-looking cupboard, only to find that when one shelf was removed, the cupboard became a door leading to a small staircase which provided a concealed lookout point and a hiding spot.  All this within a small country manor-turned-inn.  Fea supplies such details in most of the chapters of the book, providing a deeper understanding of the mechanics and cleverness of these chambers.

Fea was a historian and author, and Secret Chambers and Hiding Places was his first published work, followed by seven other books, including one on James II (to whom two chapters of Secret Chambers and Hiding Places is devoted) and another called Nooks and Corners of Old England from 1907.  Clearly, Fea possessed a strong interest in hidden spaces, focusing on elements of plots and stories that were of little interest to other historians.  Like many historical works of the era, there are no citations or sources mentioned in Secret 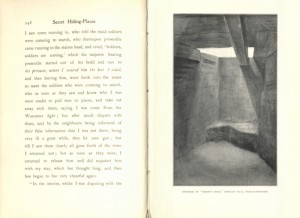 Chambers and Hiding Places, but rather Fea likely works from stories, other historical works, or perhaps even some myths.  Today, historians are expected to provide evidence for their claims and arguments, and to work primarily with facts and not rumor, yet somehow the mystery of Fea’s sources adds to his overall point about the mystique of these secret spaces – nothing is known for certain about who hid there, how they felt, why they hid, but Fea makes conjectures about such things, which are unknowable, to add to his story.

Though in some ways Secret Chambers and Hiding Places is a questionable work of history, it is a valuable historical source.  Fea provides drawings of the secret spaces he discusses, to help describe the mechanics of the chambers and provide useful context.  He shows that he has been to many of these spaces (as he did the drawings himself) and wishes for his readers to be as mesmerized by them as he is.  Secret Chambers and Hiding Places never claims to be a history, but Instead seeks to blend history with legend.  Fea makes the two indistinguishable.  It is unclear what is fact versus fiction, history versus legend.  But that seems to be Fea’s point.  He takes things which are hardly discussed (hiding holes for priests, secret passages for escapes, tunnels for assassination attempts) in the stories known by many English citizens and turns them into grand, important elements in the epic legends and history of Britain. There is something elusive and mystical about these hidden spaces that fascinates people, but it makes up only a small part of the story. What Fea’s book lacks in historical truth, it makes up for in highlighting the importance of secret spaces to England’s most famous historical events and mythologies.