Robert G. Ferris’ 1967 book Founders and Frontiersmen: Historic Places Commemorating Early Nationhood and the Westward Movement, 1783-1828 explores the early years of the United States, providing a history and analysis of how more can 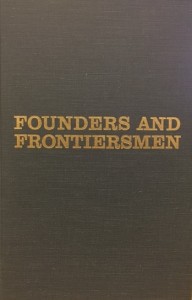 be learned about the men and the nation from the architecture.  Ferris seeks to provide a survey of historic sites in the U.S., and hopes “that citizens will use the volumes in this series to seek out and visit sites of interest to them” in order to help encourage preservation (Pg. xii).

Ferris begins the book by providing historical context to better understand the sites he uses as examples in the second part of the book.  The historical overview is crucial for making readers understand why the sites Ferris discusses are important and worthy of preservation.  The vast majority of the book is spent on the sites themselves, with some attention to what is learned from each one and how it contributes to American history, as in the case of Harpers Ferry National Historical Park in Maryland.  Ferris gives a broad and short description of the history, as well as explaining the park itself and the surrounding area.  Interestingly, Ferris leaves out some important elements from the story of Harpers Ferry: he denounces John Brown as only a man “who conceived himself as an instrument of providence…[and] led a violent raid on the town that helped goad the Nation closer to civil war” (Pg. 162).  While what Ferris said isn’t untrue, it leaves out important parts of the story.  John Brown did believe he was given divine permission to murder, specifically he believed it was time to bring the struggles over slavery to a head. Brown was, in fact, a fierce abolitionist who then turned to murder to try to achieve his goals.  There are some instances like this throughout Founders and Frontiersmen, where Ferris provides his own interpretation without presenting the full story.  This is less surprising, especially in the case of Harpers Ferry, when considering the book was published at the height of the Civil Rights Movement and fear of similar violence over race reached a zenith.  But overall, Ferris’ overviews are useful and provide that information which best adds to his argument for preservation.

Founders and Frontiersmen makes a compelling argument for the importance of these historic places, and thereby argues effectively for their continued preservation.  Ferris provides a fantastic overview, showing that the early United States was chaotic – a young nation finding its way in an experimental form of government, freshly broken away from the superpower of the day.  Many colonists fought for independence and the promise of a greater destiny in the American Revolution.  Ferris explains how that destiny then translated into the idea of Manifest Destiny: the notion that the United States was meant to expand westward.  But despite all this spirit and belief in American greatness, some of the architecture, particularly that of the capital city, is inspired by foreign buildings, a fact which Ferris hints at but never fully states. Greek elements are clear in the Capitol building, as well as in Thomas Jefferson’s Monticello.  Yet there are uniquely American elements to each building, too.  The octagonal shape of Monticello  is distinctive and representative of Jefferson’s own tastes.  How did Americans go about adapting and developing their own architectural styles? Did the idea of Manifest Destiny aid in this? What role did climate, materials, and social needs play in developing frontier architecture?  Ferris never satisfactorily answers these questions, and he never fully admits that Americans have a habit of borrowing and building upon the work of others.  The idea of democracy itself was originally Greek, but the Founding Fathers adapted it to a new situation; the Declaration of Independence and the Constitution borrowed ideas from British philosophers John Locke and Thomas Hobbes.  But in spite of this, no one would say that the Constitution or the Declaration are anything but American documents.

In the popular musical Hamilton, Alexander Hamilton says at one point, “I’m just like my country, I’m young, scrappy, and hungry, and I’m not throwing away my shot.”  Though Hamilton is a piece of historical fiction intended for Broadway, there is some truth to this statement. The Founding Fathers and the frontiersmen had to be, if not young, then at least “scrappy” and “hungry.”  These were men who took on the British army and (after many losses) won and then built a nation.  Frontiersmen faced harrowing experiences themselves while seeking to fulfill the idea of Manifest Destiny – starvation, an unyielding geography and climate, or Native Americans who were understandably mistrustful of Americans – yet they kept moving West until they hit the Pacific Ocean.  The early United States took elements of other nations’ architecture, culture, philosophy, and made it their own, so much so that now democracy, the Capitol, and the frontier house are strongly associated with the narrative of the United States. The Founding Fathers and the frontiersmen refused to throw away their shot: they adapted and created buildings, governments, and ways of thinking about American destiny that, though perhaps not entirely American in origin, are now closely intertwined with the American consciousness.  Today, Americans are known for their creativity, tenacity, and innovation, in part because of United States history and belief in itself; contemporary generations have shown themselves to be just as scrappy, just as hungry, and just as unwilling to throw away their shot at shaping the American narrative, landscape, and destiny as those who came before.