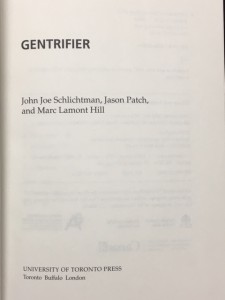 John Joe Schlichtman, Jason Patch, and Marc Lamont Hill’s book, Gentrifier, explores the complex issue of gentrification from the perspective of the “gentrifier.”  The authors identify themselves as gentrifiers, “middle-class people who moved into disinvested neighborhoods in a period during which a critical mass of other middle-class people did the same, thereby exerting economic, political, and social pressures upon the existing community” (pg. 4).

The personal narratives of the authors adds greatly to the effectiveness of the book.  Schlichtman, Patch, and Hill seek to understand the underlying causes behind gentrification, finding race, economic disparity, and overall cultural tensions to be dominating factors.  And though they provide no long-term solutions, they do “illuminate the place we strongly believe it must begin” (pg. 202).  They acknowledge the complexity of gentrification and its factors, but advocate a simple start to a solution: engagement and cross-cultural interaction.   Coming from the perspective of those who have moved en masse to up-and-coming neighborhoods, Schlichtman, Patch, and Hill sympathize with the “discontent” of those whose neighborhoods have been “invaded” by people like the authors (pg. 108).  Overall, Gentrifiers provides fascinating insights into gentrification from all perspectives, as well as identifying several important causes, if no solutions.  It succeeds in making the reader thinking about the issue more deeply, and the engagement they strongly advocate is certainly an excellent beginning step in finding a solution.

Recently, “gentrification” has become something of a cultural and political buzzword.  Politicians, architects, builders, city planners, and communities use it to oversimplify a complicated issue with matters of race, gender, and economic inequality at play, to only scratch the surface.  “Revitalization” is another common buzzword.  It is exciting when a neighborhood is “revitalized,” because it means better homes, better schools, better investment in the area as a whole.  But “revitalization” is arguably just a synonym for “gentrification,” just with a positive spin that avoids that dreaded g-word.  Revitalization is defined as “the action of imbuing something with new life and vitality” (according to Google Dictionary).  This implies that the life and vitality before was inconsequential.  And therein is the rub: how can you claim to care about a community while pushing out its residents?  Why does revitalizing a community have to mean bringing in a new, richer, and (most likely) whiter community instead of catering to the existing community?  For example, in Memphis, Tennessee, an old art deco Sears Crosstown building has sat empty for decades after numerous businesses tried to do something with the massive building.  Finally, it was purchased by developers who wished to see the building in use again.  Over the course of the project, the developers have remained aware of the looming danger of gentrification of the Crosstown neighborhood surrounding the building, especially after watching the process occur in the nearby Cooper Young District of the city.  Still, despite all this awareness, the cost of living (especially the price of homes) in the Crosstown area have risen, and the Sears building is not even open.  The process of gentrification has begun, though it is not as pervasive as what was seen in the Cooper Young project – yet.

Such failed or failing instances raise questions about the probability of revitalization without gentrification.  Gentrifier adds to this narrative with a surprisingly optimistic thesis and an important perspective that leaves the reader cautiously hopeful, because they better understand the complexity of the underlying causes of gentrification and the difficulty of finding solutions.  Still, come August 19, 2017, Sears Crosstown, now known as Crosstown Concourse, will be bustling with Memphians eating MemPops popsicles, drinking craft beer, and shopping at the numerous businesses in the gigantic renovated atrium.  Down the block from Crosstown, other Memphians will be packing up the house they have called home for 30 years, because the building down the street (which had sat empty longer than they had lived there) has made it impossible to stay.