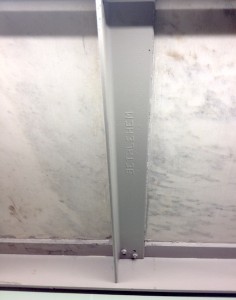 While in Special Collections last week, I happened to look up and I caught sight of the word “Bethlehem” on one the supporting beams.  And then I got super excited, which may not be everyone’s reaction.

Prior to the Architecture and Planning Library, I worked at Lehigh University in Bethlehem, PA. Whenever I told people that I lived in Bethlehem, their reaction was usually: Oh like Mad Men.

If you are familiar with the episode, New Amsterdam (Season One), you might remember that Bethlehem, PA was home to Bethlehem Steel.  And I am madly in love with the factory ruins. The history of the steel mill is complicated, and I am an outsider. However, I care very deeply about the town and the factory. 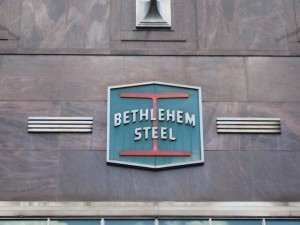 I recognize, however,  that my appreciation for the site comes from a different place than those that worked at the steel mill and lived in Bethlehem while it was in operation.  Whenever the weather was good, I would  walk home from the university and cross the New Street Bridge to the north side of town. I often would pause for moment, captivated by stacks. Occasionally, they would be artfully illuminated at night and would glow the like the Emerald City in the Wizard of Oz.

If you are intrigued by the photos, Lehigh University Libraries has two projects that seek to document the history associated with the steel mill and Bethlehem, PA. The first is Beyond Steel: An Archive of Lehigh Valley Industry and Culture. The second is Still Looking for You: A Bethlehem Place + Memory Project. Or feel free to stop by and chat about the projects and the site.

The Texas Committee for the Preservation of Architectural Records (TxCOPAR), sponsored by the Alexander Architectural Archive at the University of Texas at Austin, has been established to assist in the location of historical records and the preservation of the architectural heritage of Texas. The web site for the Committee can be found at http://drupal.lib.utexas.edu/apl/aaa/copar.html.

TxCOPAR will serve as a resource for sharing expertise on the management and preservation of architectural records, as well as information about the location of those records. To date, over 30 repositories have been identified in Texas. At this early stage, the web site is primarily dedicated to gathering membership information through its online form. The Texas Committee urges those who own or care for architectural documents or those who are interested in locating and preserving architectural records in Texas, to join TxCOPAR.

The Committee follows the model of other regional COPARs that are part of the national COPAR (Cooperative Preservation of Architectural Records) effort. This national effort was established in 1973 and is maintained by the Prints and Photographs Division of the Library of Congress as a center for information on architectural records in the United States. COPAR directs researchers to repositories in all states.

TxCOPAR is suitably based at the Alexander Architectural Archive, the largest repository of architectural records in Texas, with more than 250,000 drawings and over 860 linear feet of papers, photographic material, models, and ephemera, representing thousands of projects in Texas and beyond. The Alexander Architectural Archive is located within the Architecture and Planning Library, a unit of the General Libraries. Many important resources are located nearby, including the Texas State Archives, the Texas Historical Commission, the U.T. School of Architecture, and the U.T. Graduate School of Library and Information Science (GSLIS) with its strong Archives and Preservation and Conservation Studies programs. TxCOPAR, however, is a statewide effort dependent on its members. It is a statewide service committed to the preservation of architectural records in Texas and the sharing of information about the location of these records.