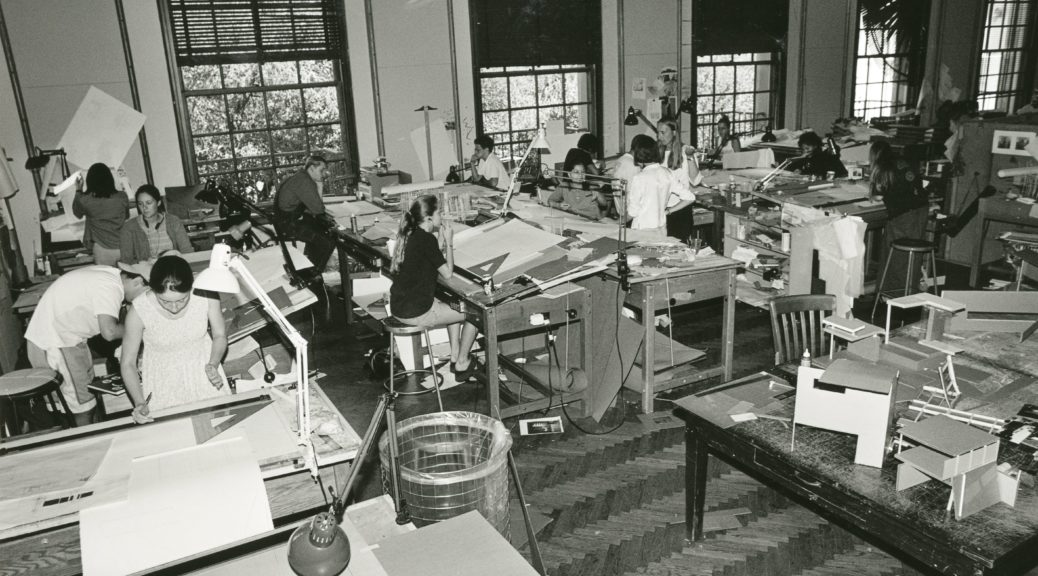 Part I: Charles Moore, Harwell Harris, and the Texas Rangers

Since last fall I’ve been processing the primarily photographic archive from the Visual Resources Collection. To date, the archived collection consists of 20 manuscript boxes, 8 binders, 3 oversized flat file boxes, 1 negative box, and other large posters scattered among select flat file drawers. With materials spanning the 1930s to the present, the archive offers a unique glimpse into the history of the School of Architecture. A key component of the Visual Resources Collection’s mission has been research and documentation support for the School of Architecture’s faculty and students, and it is this particular orientation that has generated so many of the on-site photographs that are now part of the Architectural Archives’ growing collections. In Frederick Steiner’s foreword to Traces and Trajectories, a compilation of scholarly output about the history of UT’s School of Architecture, he writes that “[t]he success and advancement of universities depend on people.”1 This aspect of the collection (investment in human capital, that is) has been part of what has made it particularly captivating and rewarding to process.

Renowned architect Charles W. Moore began teaching at the UT-Austin SOA in 1985 as the O’Neil Ford Chair of Architecture–this would be his final teaching post.

Above are several long-serving faculty members, including Peter Oakley Coltman (left), one of the chief faculty members for Community and Regional Planning, Blake Alexander (center), preservationist and namesake of the Alexander Architectural Archives, and Hugh McMath (right), former acting dean before Harwell Hamilton Harris accepted the position of director in 1951.

In 1951, Harris became the first to direct the newly independent School of Architecture (up to this time, it had been administered through the Department of Engineering). Though his tenure at the University of Texas would be short-lived due to in-fighting and his strong desire to return to his own design projects, he left an indelible mark upon the School.2 During his stay, he hired some remarkable teachers that later became part of an informal cohort known as the “Texas Rangers”–known for their emphasis on form, embrace of interdisciplinary modes of art production, and their recognition of the generative capacity of idiomatic and regional architecture.34 Among the “Rangers” were Colin Rowe, Bernhard Hoesli, Lee Hirsche, John Hejduk, and Robert Slutsky (all of whom were hired by Harris and are pictured above); and later, shortly after Harris’s re-location to Fort Worth where he devoted himself to the Ruth Carter Stevenson commission, Werner Seligman, Lee Hodgden, and John Shaw also joined the SOA faculty, and came to form part of the group as well. Though few of the Rangers would stay for long, the curriculum they collectively created shaped the development of the School and their legacy can still be espied in the School’s “foundational” pedagogy.5

3. Smilja Milovanovic-Bertram, “In the Spirit of the Texas Rangers” in Traces and Trajectories (Austin: The University of Texas, 1991), 63-65.