Wrighte, William. Grotesque Architecture; or, Rural Amusement: Consisting of Plans, Elevations, and Sections, for Huts, Retreats, Summer and Winter Hermitages, Terminaries, Chinese, Baths, Mosques, Moresque Pavilions, Grotesque and Rustic Seats, Green Houses, &c. Many of which may be executed with Flints, Irregular Stones, Rude Branches, and Roots of Trees. The Whole Containing Twenty-Eight New Designs with Scales to Each. To which is added an Explanation with the Method of Executing Them. London: J. Taylor, 1802. 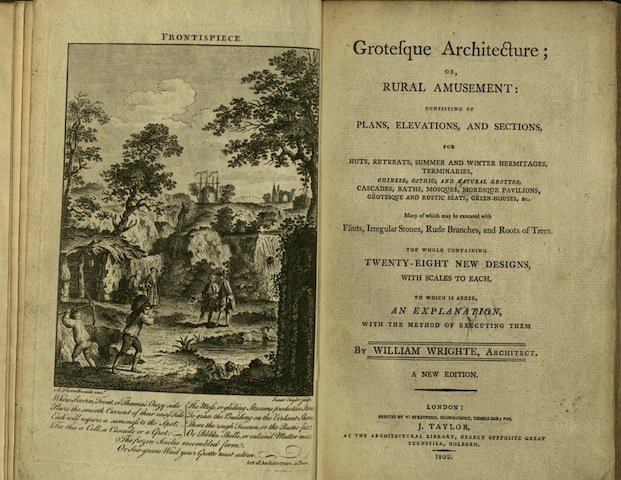 April is World Landscape Architecture Month, and I realized today that I have nearly let April slip by without recognizing it. I thus selected William Wrighte’s work which includes designs for follies, bridges, baths, and water features. The style of the designs reflects rustic and Gothic architecture as well as an influences from Eastern cultures. Each plate is accompanied by a brief description to aid in the construction of the structures with tips on its ornamentation or siting.

We received many, many new books this week! Here are two on landscapes: 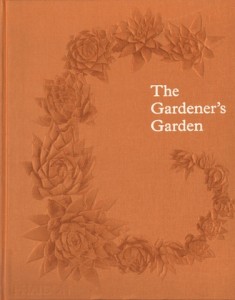 This encyclopedia-esque work is a good starting point for information on  landscape architecture, whether contemporary or historical. The content is arranged geographically and includes gardens as early as the 14th century. Each entry includes location, names of architects/designers, date, size, climate, type/style, and brief description. While plans of the gardens are not included, each site does include representative photographs. There is also a brief glossary. While flipping through I was surprised by what was included or excluded. Madison Cox writes in the prefatory note, “Throughout The Gardener’s Garden, more than 250 examples illustrate the vast wealth of human expression when it comes to the creation and definition of what makes a garden” (pg. 5). Within the glossary “garden” is not included, so it will be left up to the reader to determine how the editors understand garden. Look for this work in our reference collection.

To Breathe with Birds is a collection of sixteen essays by Václav Cílek. Laurie Olin writes of Cílek’s approach in the foreward:

...challenging the reader, most likely a postmodern urban dweller, to think 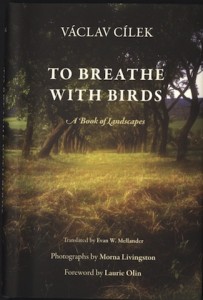 with him from within a tree or a stone or small creature. The world he conjures in these essays ranges widely, but most frequently evokes places and things once common in profound ways to people on all continents: mud and dust, clouds of insects, flocks of wild creatures, birds and herds, sunlight, small sounds, myths and darkness, stars and spirits, long walks through fields from town to town on foot in various weather. (Olin, “Foreward,” xi)

Since I have not been able to post the last two Fridays, I am over sharing today! There is no theme that connects my selections- just things that struck my fancy. As I have noted before, I rely on serendipity – I browse but rarely with a focused intention. I think it unlikely that I would have found these works starting with the catalog.

I was rather struck by graphic print on the cover. Berlepsch-Valendas documented the domestic architecture of Bournville and Port Sunlight, England near Birmingham and Liverpool, respectively. The text is written in German, so my ability to engage with it is limited. He includes photographs and plans of the towns. The second half of the work is the real treat. There are twenty plates with drawings documenting the architecture Berslepsch-Valendas encountered. The attention to detail is quite lovely.

Thomas, Rose Haig. Stone Gardens with Practical Hints on the Paving and Planting of Them; Together with Thirteen Original Designs and a Plan of the Vestal Virgin’s Atrium in Rome. London: Simpkin, Marshall, Hamilton, Kent and Co., LTD., 1905.

Again the cover caught my eye. I rather liked the graphic representations of the gardens, both on the cover and the plates within, and endpapers.

A FLAT stone garden costs not a little trouble and, if far from stone quarries, not a little money to make. But the reward is great, for it is a means of growing many tiny plants that would be hidden in the herbaceous border, and lost in a rock garden. In the stone garden each plant grows by itself, and thus its ways and habit of growth can be so much better observed, for there one may wander and enjoy the companionship of plants at those seasons of the year when in our damp climate the lawn is objectionable with the mists and heavy dews of autumn and winter.  (pg. 7)

Again the text is written in German; however, the documentation of the hotels and the natural landscape is quite useful. Prokop included drawings- sections, elevations, plans, details, and perspectives- and photographs, both of the structures and the dramatic views of the mountains. The work would be quite useful for those interested in nineteenth-century hotels. Many of the hotels are of the rustic lodge variety; however, some are more classically inspired.

[Scrapbook of Reviews, Prospectuses, and Other Material Related to Garner and Stratton’s Domestic Architecture of England during the Tudor Period.] England.

The title of this book struck me initially- which on the spine is just Tudor Domestic Architecture Reviews- because I have been watching Wolf Hall on PBS. It was not at all what I was expecting. It is truly a scrapbook of items related to The Domestic Architecture of England during the Tudor Period; Illustrated in a Series of Photographs & Measured Drawings of Country Mansions, Manor Houses and Smaller Buildings with Historical and Descriptive Text by Thomas Garner and Arthur Stratton.

Someone carefully collected the press releases and reviews of the publication and pasted them into this book. He hand wrote page numbers and a table of contents and marked in pencil sections of the reviews, which primarily date from 1908-1912. In an inside pocket, the collector stashed a few other related items, including a handmade mock-up of the title page. There is no record of the creator of the scrapbook.

Curious about the publication itself, I found a two volume set published in 1911. Our copy came to us with the Ayres and Ayres archive.  On the inside cover, a couple of quick sketches were drawn, which is always a favorite find.

Relying on my trusted method of serendipity, I found three books that I wanted to share today. They are not thematically related; however, due to their small size, they are housed near each other.

I was intrigued by both the tiny size and title of the book. “Frederick Post Company” was stamped on the spine; having no prior knowledge of the company, I was curious about the contents. I was quite surprised to discover a supply catalogue of drawing instruments and other equipment related to drafting and construction. The Frederick Post Company offered blue print papers, slide rules, drawing instruments, surveying equipment, plum bobs, and a whole host of related items.

A stamp on the title page identified local architect Roy L. Thomas, whose papers are housed in the Alexander Architectural Archive, as the previous owner. The catalogue seems like a curious thing to save, though I am glad Mr. Thomas did. The items for purchase speak to a rather different process of design than that of CAD.

This slim little book contains several interesting drawings of gardens by Max Benirschke and Franz Lebísch. While I am unfamiliar with both the author and the illustrators, the drawings reminded me of Charles Rennie Mackintosh.

The Official Guide to the World’s Columbian Exposition may rate as one of my favorite finds in Special Collections to date. While the images contained in the text might be familiar to those who study American architecture, there is something rather special about being able to examine the guide first hand. In addition to the illustrations and map, it provides an overview of the fair, descriptions of the buildings, useful advice for travelers, and information about Chicago. While the Ferris Wheel is not illustrated, I rather like the description: This to some extent, takes the place of the Eiffel tower. Visitors are hurled 250 feet into the air, in cars similar to railway coaches in construction (pg. 152). I also had no idea there was a New England Clam Bake Building (pg. 153)!

Our copy is inscribed by several previous owners: Dr. N. S. Davis at State and Randolph; V. Weldon of Chicago; and Mr. S. E. Weldon of Cuero, Texas. S. E. Weldon left explicit instructions that his book should be returned to him if found. He writes:

The finder of this book, if at any time it be lost, will please send it through the [missing text] to the last address. Put one cent on it. I will pay [potentially missing text] rest. S.E.W. 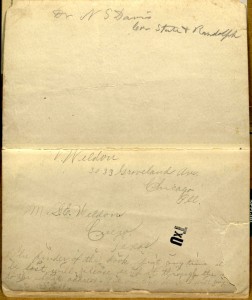 Scott, Frank J. The Art of Beautifying Suburban Home Grounds of Small Extent. Illustrated by upward of two hundred plates and engravings of plans for residences and their grounds, of trees and shrubs, and garden embellishments; with descriptions of the beautiful and hardy trees and shrubs grown in the United States. New York, John B. Alden, 1886, [c1870].

There is no way in which men deprive themselves of what costs them nothing and profits them much, more than dividing their improved grounds from their neighbors, and from the view of passers on the road, by fences and hedges. The beauty obtained by throwing front grounds open together, is of that excellent quality which enriches all who take part in the exchange, and makes no man poorer. As a merely business matter it is simply stupid to shut out, voluntarily, a pleasant lookout through a neighbor’s ornamental grounds. If, on the other hand, such opportunities are improved, and made the most of, no gentleman would hesitate to make return for the privilege by arranging his own ground so as to give the neighbor equally pleasing vistas into or across it. It is unchristian to hedge from the sight of others the beauties of nature which it has been our good fortune to create or secure; and all the walls, high fences, hedge screens and belts of tress and shrubbery…are so many means by which we show how unchristian and unneighborly we can be….To hedge out deformities is well; but to narrow our own or our neighbor’s views of the free graces of Nature by our own volition, is quite another thing. (60-61) 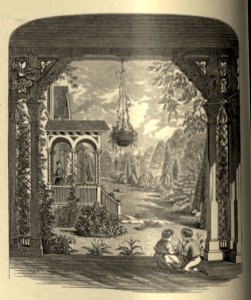 Cridland, Robert B. Practical Landscape Gardening: The Importance of Careful Planning, Locating the House, Arrangement of Walks and Drives, Construction of Walks and Drives, Lawns and Terraces, How to Plant a Property, Laying Out a Flower Garden, Architectural Features of the Garden, Rose Gardens and Hardy Borders, Wild Gardens and Rock Gardens, Planting Plans and Planting Lists.  New York, A. T. De La Mare Company, Inc., 1927.

Have some thought for your neighbor and the passerby. Surely such an opportunity is not to be overlooked, for of all the pleasures none is to be compared with that which brings joy to the heart of others.

The owner who plans, builds and cultivates beautiful things is a benefactor, and in no channel of thought or activity is there greater or more satisfying response than in the creation of the beautiful in landscape design (Fig. 3), showing a well placed flowering specimen. (pg. 10) 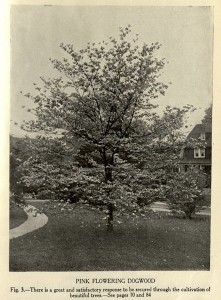 Unless some minimum cooperation between neighbors exists- so that each neighbor thinks about what his planning may do to the people next door, and knows that they are just as concerned with what they may do to him- problems like the elm and the roses are bound to arise. (pg. 259) 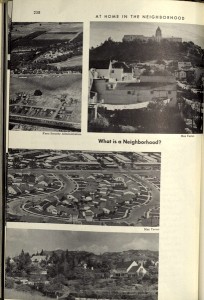