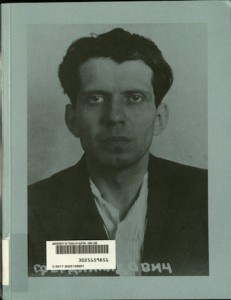 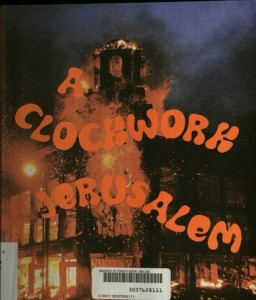 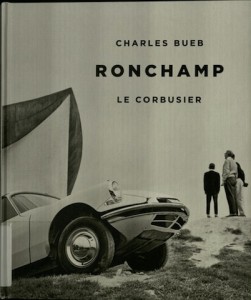 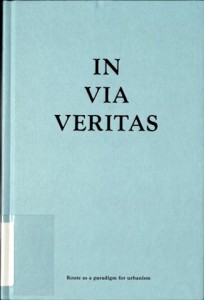 According to the authors:

The word ‘route’ is a contraction of the Latin phrase via rupta. Via means ‘road’, while rupta comes from the verb rumpere, ‘to break open’. A route is a road that is broken open, opened, cleared, freed, forced, or paved. A route is the result of an act of violence- rupture. The route carves its way into the landscape. The route breaks open the world. (pg. 11)

The authors identify three archetypes of routes: procession, distribution, and migration. They create further classifications in each archetype. Procession contains pilgrimage, parade, course, stroll, and patrol; distribution- trade route, rounds, scavenger route, smuggling route; and migration- emigration, trek, commute, journey, flight, deportation. They define each classification and then examine these types in relation to the N16 in Flanders. Finally, the authors explore case studies for each of the archetypes. 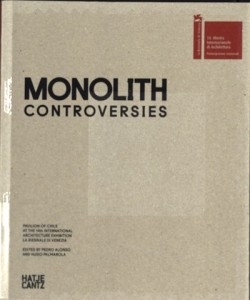 Monolith Controversies is the title of the Chilean exhibition for the 14th Venice Architecture Biennale as well as the name of the corresponding publication. The Chilean exhibit was curated by Pedro Alonso and Hugo Palmarola.

According to Germán Guerrero Pavez, Ambassador, Director of Cultural Affairs of the Ministry of Foreign Affairs, Government of Chile:

Chile is represented by Monolith Controversies, a project by Pedro Alonso and Hugo Palmarola based on an original panel produced by the KPD factory, of Soviet origin, which used to operate in the city of Quilpué. The panel contains a unique, symbolic and historical value, as President Salvador Allende signed the wet concrete when inaugurating the plant in 1972. The fate of this panel, and the way it was re-signified during the subsequent dictatorship, as well as its current status as a ruin of modernity, is telling of the history of prefabricated housing in Chile and in the world, which is narrated from within such a basic support for construction: a neutral panel, whose reading the curators leave open to the public. (introductory material)

The book contains a series of essays and photo essays connected to the exhibit and the history of the KPD & panel.

Fin-de-Siècle Architecture = Seikimatsu Kenchiku by Riichi Miyake with photos by Tahara Keiichi is a beautiful oversize six volume set documenting architectural and ornamental styles from the end of the nineteenth century and beginning decades of the twentieth century. Each volume contains fantastic large color photographs of exteriors and interiors plus architectural sketches and renderings, elevations, details, and city plans.  Volume 2 Modernismo and Architectural Millennium documents buildings from the Catalan Modernismo movement in Barcelona which was synchronous to several design movements in other countries (Art Nouveau, Liberty, and Modern style in England and France, Jugendstyl in Germany, Sezessionstyl in Austria, Floreale and Liberty in Italy, and Modernisme in Spain) that were influenced by the Arts and Crafts movement and Gothic revivalism, with the additional influence of the Moorish design prevalent in Spain. These design influences combined with Catalan nationalists’ desire to create a distinct national identity from Spain, bourgeois patronage with ample money and construction industry resources, and available land within the city of Barcelona produced one of the most vibrant and distinctive styles of architecture in history. The architects’ use of curved lines, vegetal and organic motifs, asymmetry, and dynamic shapes embellished with a fantastic combination of decorative ironwork, glazed tile, stone, exposed brick, colored glass, sgrafitto, wood, and marble created a rich mosaic of shifting shapes, textures, and colors unlike any other built environment in the world. You may not be familiar with the term “Modernismo”, but you know the style when you see it.

Three of the most important architects of the Modernismo style are Lluis Domènech i Montaner, whose work incorporates many Moorish elements (Casa dels Tres Dragons, Hospital de Santa Creu i de Sant Pau, Palau de la Música Catalana), Joseph Puig i Cadafalch, whose buildings are heavily influenced by medieval style (els Quatre Gats, Casa Marti, Casa Terrades), and Antoni Gaudi, whose works incorporate fantastic organic forms inspired by nature (Casa Batlló, Casa Milà, La Sagrada Familia). Also of note are Joseph Maria Jujol, who collaborated with Gaudi on several of his most famous buildings, and Enrique Nieto, whose work as the city architect of Melilla, a Spanish enclave in North America, created the only large concentration of Modernismo style structures outside of Spain. 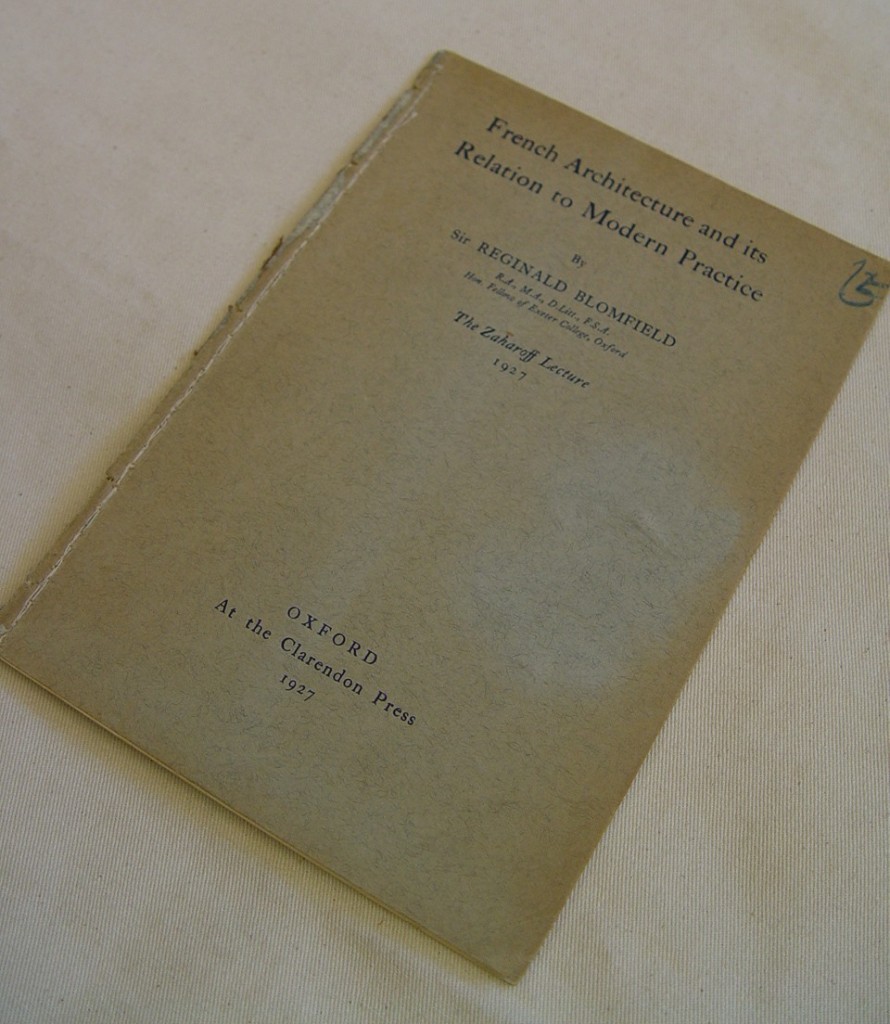 Nostalgia defines this the third title in our French architecture series from the pen of Sir Reginal Blomfield. An English gentlemen, architect and scholar, Blomfield extends his considerable experience beyond the bounds of academic contribution and into the realm of criticism to celebrate purity and order in architectural design. His romanticized yearnings locate a peak in French Architectural achievement, one that slowly erodes “in the shallows and quicksands of Viollet le Duc’s medieval travesties.” This 21-page manifesto includes other such vitriolic gems extolling, by nation, the undesirable idiosyncrasies of modernist experimentation happening throughout the continent. At times, Blomfield betrays a chauvinism born not out of a natural proclivity toward racial superiority but rather emerging out of his own quintessential Englishness, a celebration of the exquisiteness of his own citizenship. And in his nationalist reverence for the past and even pastness, he recalls the Scholar Gypsy, who witnesses “this strange disease of modern life” as it “Still nurs[es] the unconquerable hope, Still clutch[es] the inviolable shade.” 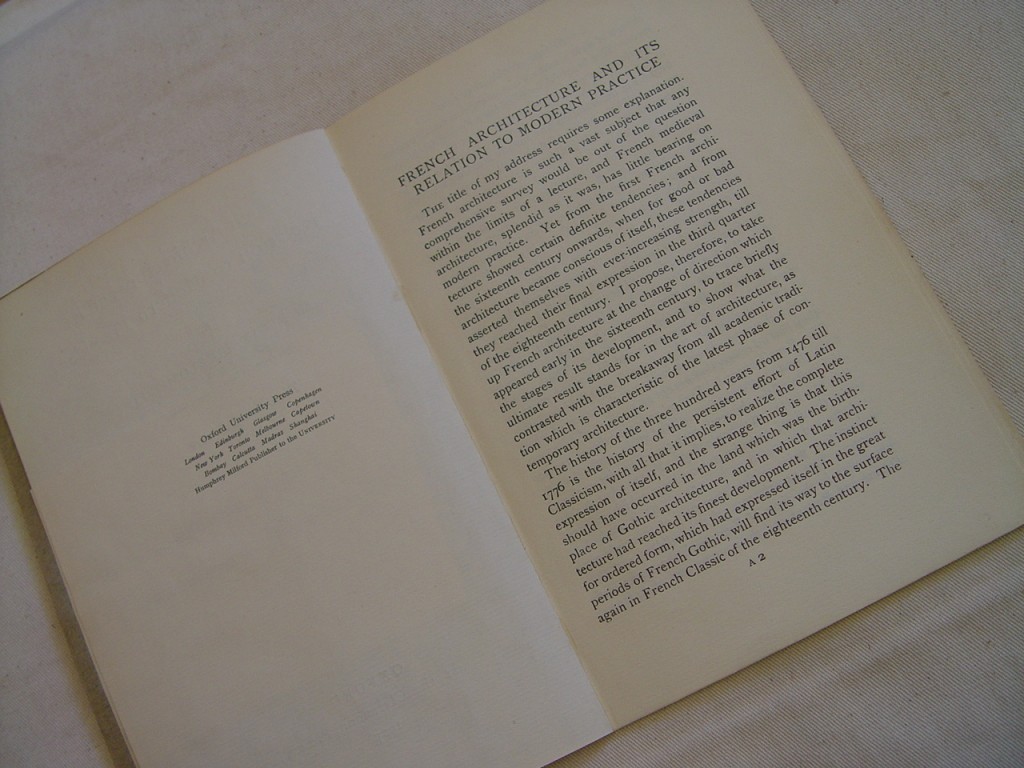