Reckoning with Colin Rowe is a collection of essays or interviews regarding his influence. Robert Maxwell, Anthony Vidler, Peter Eisenman, O. Mathias Ungers, Leon Krier, Rem Koolhaas, Alan Colquhoun, Robert Slutzky, Bernhard Hoesli, and Bernard Tschumi all make contributions. According to Emmanuel Petit, the guiding theme of the essays is as follows: …each one of them intersected with Rowe’s ideas and initially used them as a stepping-stone, only to then resolutely swerve from his ideological orbit and create new concepts for the discipline. (Petit, “Rowe After Colin Rowe,” 5)

Robert Slutzky, for example, recounts the course of his relationship with Rowe, including their appointment to the School of Architecture at the University of Texas, Austin. Slutzky narrates:

The worldly problems just mentioned were somehow bracketed, enabling us to put our entire efforts into this pedagogical change without having to act on problems that were much more palpable in the big cities in America. In the big cities, the newspaper headline was always in front of you and the anxiety was always there. Austin was pacific, sedated, and we could concentrate more clearly. That was an important part of the Texas experiment. This was the frame that made our experiments possible. (Robert Slutzky in conversation with Emmanuel Petit, “To Reason with One’s Vision,” 116) 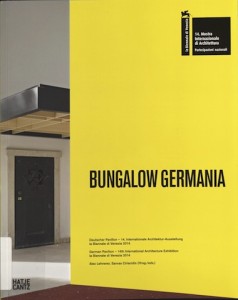 For whatever reason, I am particularly attracted to the publications associated with the 2014 Biennale. This work contains essays by Philip Ursprung, Alex Lehnerer, Savvas Ciriaidis, and Sandra Oehy, Quinn Latimer, Irene Meissner, Uta Hassler and Korbinian Kainz, and a photo essay of the pavilion by Bas Princen. Ursprung writes of Ciriacidis and Lehnerer’s pavilion:

Lehnerer and Ciriacidis have created a situation where we can experience first-hand the tension between two spatial regimes and where, in that exhibition context, we can cross from one temporality into another. (Philip Ursprung, “The Phantom of Modernism: The Chancellor’s Bungalow in the Belly of the German Pavilion,” 14) 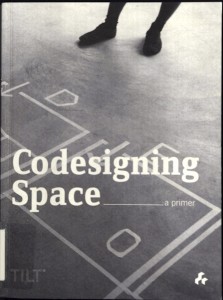 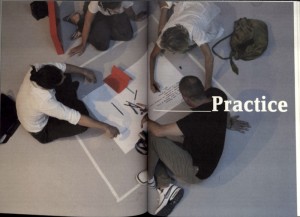