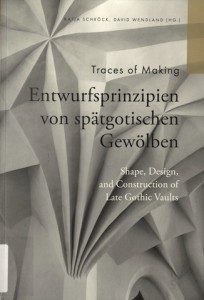 This week we have many inspiring and intriguing new books at the Architecture & Planning Library. Fall is a time of transition, which might be why I was drawn to books about reworking traditional design and materials to create something modern. These are some of my favorites from the New Books table:

Here, there, everywhere edited by Renny Ramakers and Agata Jaworska is a compilation of 16 projects by design company Droog  in locations ranging from the Canadian Arctic to the deserts of Dubai.  The book includes realistic and purely imaginative projects that address economic, social, and ecological issues at a local level.  Content includes essays, conversations and talks accompanied by photos and illustrations.

Holz = Wood: best of Detail edited by Christian Schittich discusses theory and knowledge about the use of wood as a modern construction material. This book contains thirty case studies of interior and exterior construction projects using wood as the primary design element. Projects are beautifully documented with photographs, floor plans, and cross section drawings.

Village Textures edited by András Palffy documents the concepts and designs of an international study-group on the development of historical village structures in Eastern Austria. Participants planned the addition of thirty housing units for seven sites to test strategies to counter urban sprawl in villages. Photographs and information about the villages are followed by multiple models and site plans.

We’ve got so many great new books this week, it was hard to choose! Here are three I didn’t want to put down:

The Air From Other Planets: A Brief History of Architecture to Come by Sean Lally is an intriguing discussion of the future of architecture as the design of energy. In the introduction Lally asks “Instead of thinking of architecture as a mass of inert and ossified energy–even stone and steel were not always solid masses–standing as walls in opposition to their surroundings and carving out interior space, why not look to intensify those very energy systems we know are capable of creating microclimates and distinct ecosystems so as to make them architectural materials in themselves?” (p14).  This book is a great read for anybody interested in interactive design.

Superkilen: A Project by Big, Topotek 1, Superflex edited by Barbara Steiner takes the reader through the design and construction of the multi award winning one kilometer long urban space located in an ethnically diverse neighborhood of Denmark. This book includes interviews with architects and residents, plans, maps, drawings, photographs, and an index of objects used in the project. Superkilin is sure expand your perception of the possibilities of public spaces.

Spa-De: Space and Design 19 published by Artpower is a fun source of inspiration for your next design project.  This book covers design projects from Europe, North America, and Australia completed in 2011 and 2012. Projects are presented in three sections: “Lighting Graphics,”  “Elaborately Designed Food Shops,”  and “World Spatial Design.” The beautiful large color photographs, site plans and elevations are described in Japanese and English.  Some of my favorite projects from the book are pictured below.